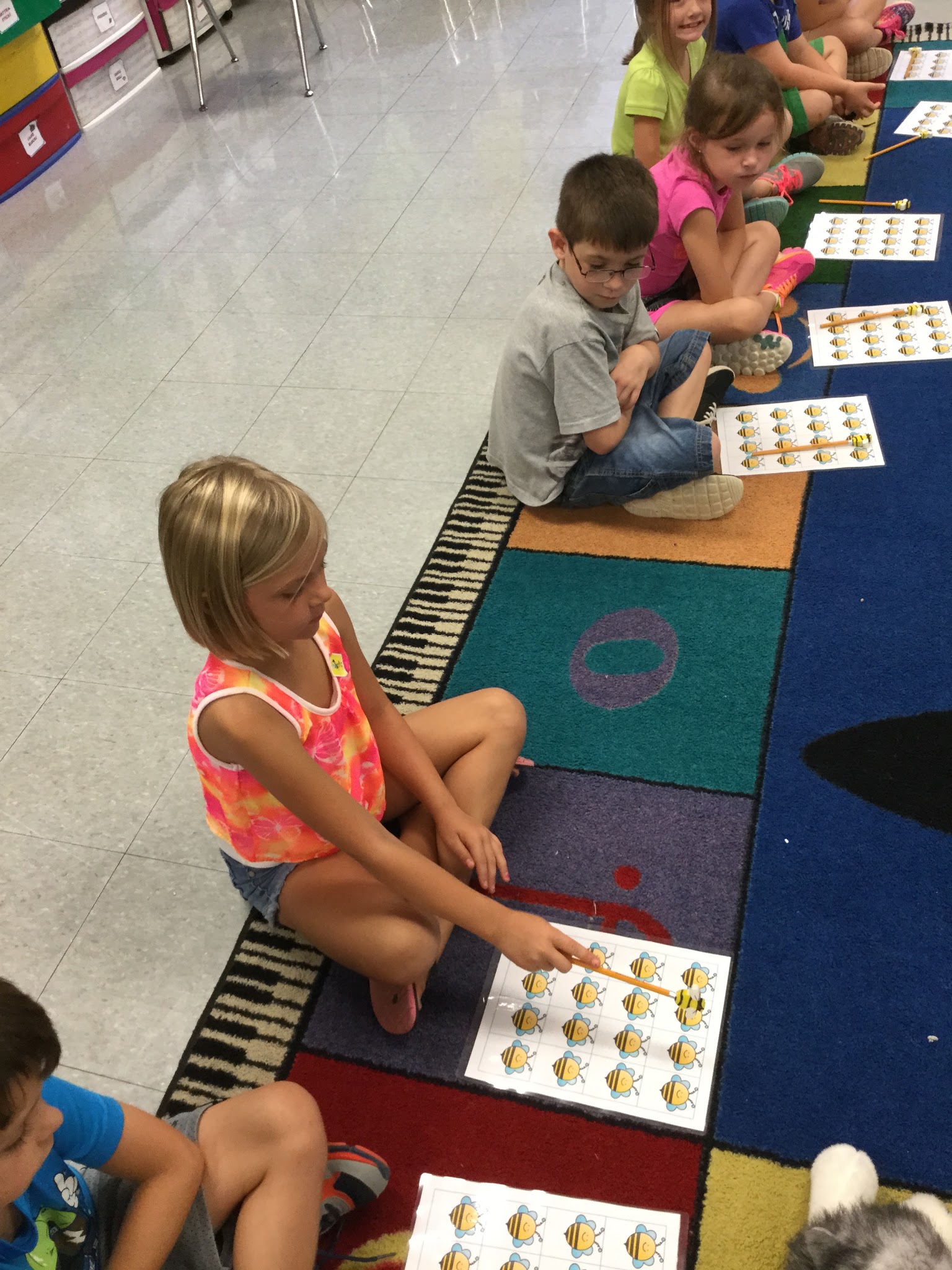 For first grade, one of the most common concepts to master is beat competency. Not only, of course, is it the crux for understanding rhythm, but it is a good measure to determine which children might actually have some type of attention issues and are constantly on the move. Initially, I would introduce identification of fast and slow before I would even worry about beat. I rationalized that beat is an ongoing objective that should be re-evaluated throughout the year, and it is. However, this year I changed my way of thinking by concentrating more on beat through various activities, moreso than I did in the past. I believe this is paying off. And I decided to concentrate on a bee theme. Why? Because I already had a bee puppet and hadn’t used “Bee, Bee, Bumblebee” for a while!

My student teacher and I started the beat unit with her leading some movement shadowing to a recording of “Flight of the Bumblebee” with Bobby McFerrin and YoYo Ma (with more of a halftime beat to make it doable). Next, the students learned the chant to “Bee, Bee, Bumblebee” by rote:

Stung a man upon his knee

Stung a pig upon his snout,

Goodness me if you’re not out!

I walked around with my handy Folkmanis bee puppet, tapping each child on the head with the beat. The child who was tapped on the word “Out” got to be the new bumblebee. Once the next “Bumblebee” was selected, the previous child performed the beat on rhythm sticks to keep occupied. My student teacher and I assessed both how the children kept a beat while they were the “bee” and when they had sticks, using a 5-1 scale. 5 meant the beat was performed precisely, 4 meant the beat was mostly performed accurately, 3 meant there were several mistakes, 2 means the child was goofing off and not trying. One meant the child was not participating. (I don’t want to give full zeros at the elementary level). While the students were performing this activity, I kept the beat on tubano to see if the children could stay with the beat I established.

Since I have my classes for an hour, after this activity, the student teacher led them to a game of keeping beat using hula hoops. We used the same Bumblee chant for this game. The students were to tap a toe outside the hula hoop, then inside the hula hoop on the beat. Again, I played tubano to establish and maintain the beat.  Most did a beautiful job!

Our final step was to use “Bee Beat Sheets” (which will be part of a whole Bee-themed package coming soon from the Orff-fully Good Music Store: Games and More. Using bee pencil toppers, the students tapped on a sheet with bee clip art as the student teacher pointed to the same images on the Smartboard and while I said the chant, playing along with the drum.

By the way, the hula hoop activity was so successful with first grade, we decided to use it with second grade, up a notch. The second graders were introduced to p and f and had to establish they understood loud and soft. My student teacher decided we could incorporate the hula hoop idea by having the students do levels: low level for soft sounds and high level for loud sounds. Here is a sample:

The things you can do with some pencil toppers, a puppet, and hula hoops. I will share more of the props I used for the loud/soft activities with second graders on another post. In the meantime, I need to muster up the courage to leave my Labor Day weekend and get ready for some new fun with my kiddos!

Future postings: Up the Ladder improvisation and creativity with sixth graders, Minecraft rhythm activities with fifth graders, and more on loud/soft with second grade. Take care, everyone!

PrevPreviousLove My Room….Again!
NextGetting Kids to Sing in Head Voice, Part One: The Adventures of Mozart the Mouth MagicianNext