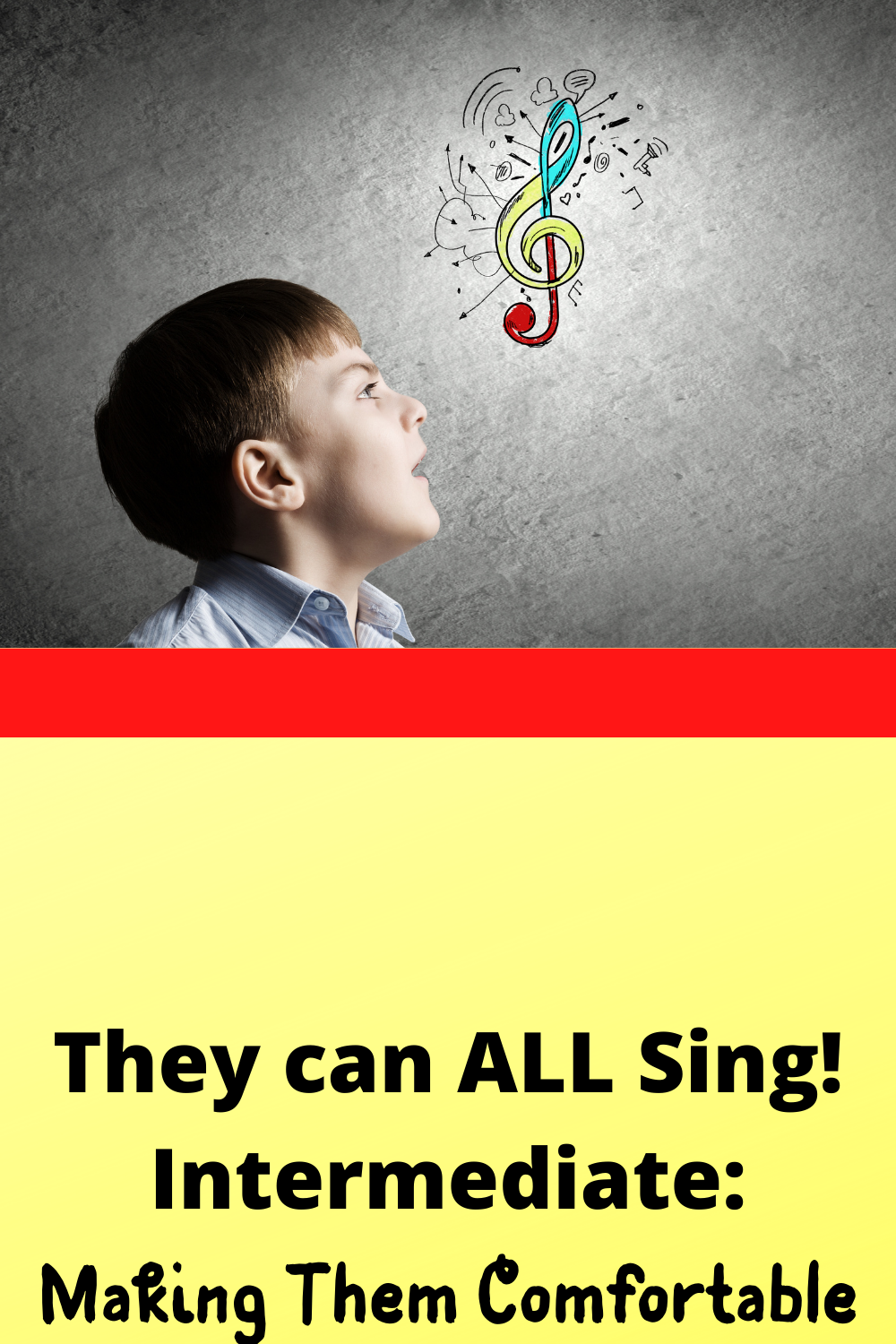 True confession time: as a former band director and one who really only sang in church choir and the bare minimum to get vocal certification, I was (and often still am) a nervous singer, especially solo in front of other adults. More on that later…..

As a teacher, though, I’ve found my voice and courage to sing in front of my students. I honestly believe, because of my background, I have an understanding of how my older intermediate students feel about singing. As much as I encourage them to sing, I know, for various reasons, many are nervous or refuse to. It can be as simple as that dastardly voice change (which happens younger and younger….but that’s for another blog), parents who didn’t sing to them, social pressure that singing isn’t “cool” (baloney!), or just plain shyness. As I tell my kids, I understand why they feel that way. The voice is the instrument that is at true extension of oneself. Make fun of that instrument…make fun of that person. You can’t disconnect yourself from your voice.

So, in a class where we strive to make our kids feel safe, have fun, and be relaxed, how can we encourage reluctant singers to participate? I’m going to be running an ongoing serious of helping students find their voices, discourage bullying, and dealing with various voice issues. Today, I’m focusing on a group that I have found challenging in the past, but actually enjoy helping find their voices now: that intermediate age of grades 4-6.

First of all, I LOVE showing them YouTube videos of vocal folds. The boys get a kick out of it, the girls get grossed out, but they need to learn what is in there and why they should take care of it. I don’t think they have any idea. For the longest time, I thought of vocal chords and long, tendon-like things in the throat. How can you care for an instrument if you don’t know how it works? Here’s an example of a video I like to show.

Another thing I discovered besides the fact that preteens like to get grossed out: they are pretty competitive and silly. They’ll buy into something if it involves competition and a unique way method of presentation. So, over the years, I’ve developed some rather unconventional ways to get most reluctant singers and participants to become engaged, at least more than they had.

For quite a few years, I have used a Vocal Football bulletin board system, very similar to the Recorder Karate system. I set up a bulletin board much like this:

Each student in grades 4-6 has a little paper “football jersey”. I keep them in envelopes by class. As individual students sing various warm-ups or solfege patterns, they pin their “shirt” on advancing yard lines, aiming for a goal. Once they hit the goal, they are eligible for the Superbowl of Vocal Football. Those patterns are even more difficult. If they achieve that, they get a bonus, such as free seating or a prize, a certificate, and their name posted outside my room. This year, I needed that bulletin board for something else, so I am developing the same activity in Smartnotebook, where each class can have a file. I actually have a Vocal Football packet on Teachers Pay Teachers, which you can get here.

Another neat activity that turned out to be loads of fun (even if it was a mess) was a yarn game. Some of you might know the discussion activity involving yarn or string that is meant to encourage people to participate in discussions. One person contributes to the discussion, tosses a ball of yarn to someone else, and holds on to part of it. This continues, until the class ends up with a rather cool design. I decided to try this last year, but with solfege singing with my older kids. We sang a diatonic scale with solfege. One student started on pitch (and the class worked with that person if they weren’t quite on). Once leader sang the pitch, the class echoed it until everyone was in tune, and the leader tossed the yarn, holding on to one part. The next person sang the next solfege pitch, and we continued. With my bigger classes of 28, we did have to go through the scale more than once, but it was a blast, as you can see here!:

My last idea for today was inspired by a video by Bobby McFerrin. Bobby was demonstrating the beauty of the pentatonic scale in this video, and immediately, signals started going off in my head. I used large dots corresponding with the Boomwhacker colors and developed a Solfege Shuffle. I even use this with second grade. I started off as the conductor, using simple so-la-mi patterns (green, purple, and yellow spots). As I tapped each spot, the students sang the corresponding syllable. It helped my second graders understand that going to the left meant singing lower and going to the right meant singing higher, a nice segue for instruments later. For my older kids, as they sang various intervals in tune, I gradually started adding more dots until I had a full diatonic scale. When I was brave enough, I encouraged various students to be the conductor. I noted that the reluctant singers were not so reluctant to be conductor. Not only that, but when others were the leader, those “reluctant” singers were no longer quite so reluctant.

I love this game a lot! It’s fun for me, and a quick assessment to see who was trying to do their best and who was having difficulty matching. You can find a version of the Solfege Shuffle on my TPT page here.

Finally, once I encouraged students to focus through the use of audiation, singing improved remarkably. Our kids have trouble focusing, and that includes true listening. Kids don’t stop to listen. By adding accompaniment as the last thing, modeling, and using student models, my students, slowly but surely, are matching better. One trick with audiation I use it to sing a pattern of a song we are learning and make them sing it in their heads before singing it back without me. When they are forced to stop and the room is quiet, pitch match is not only improved, but the ability to sing in harmony gets better because the phrase becomes innate. Stopping for silence before singing might seem like a time waster, but like stopping to review rules, in the end, it saves endless frustration and wasted rehearsal time. And the kids feel better!

Please feel free to share ideas of how you encourage your intermediate kids how to sing and participant. I love the idea shares. Next time….working with primary head voice.