Resources for Teaching the Music of Ukraine Thoughtfully 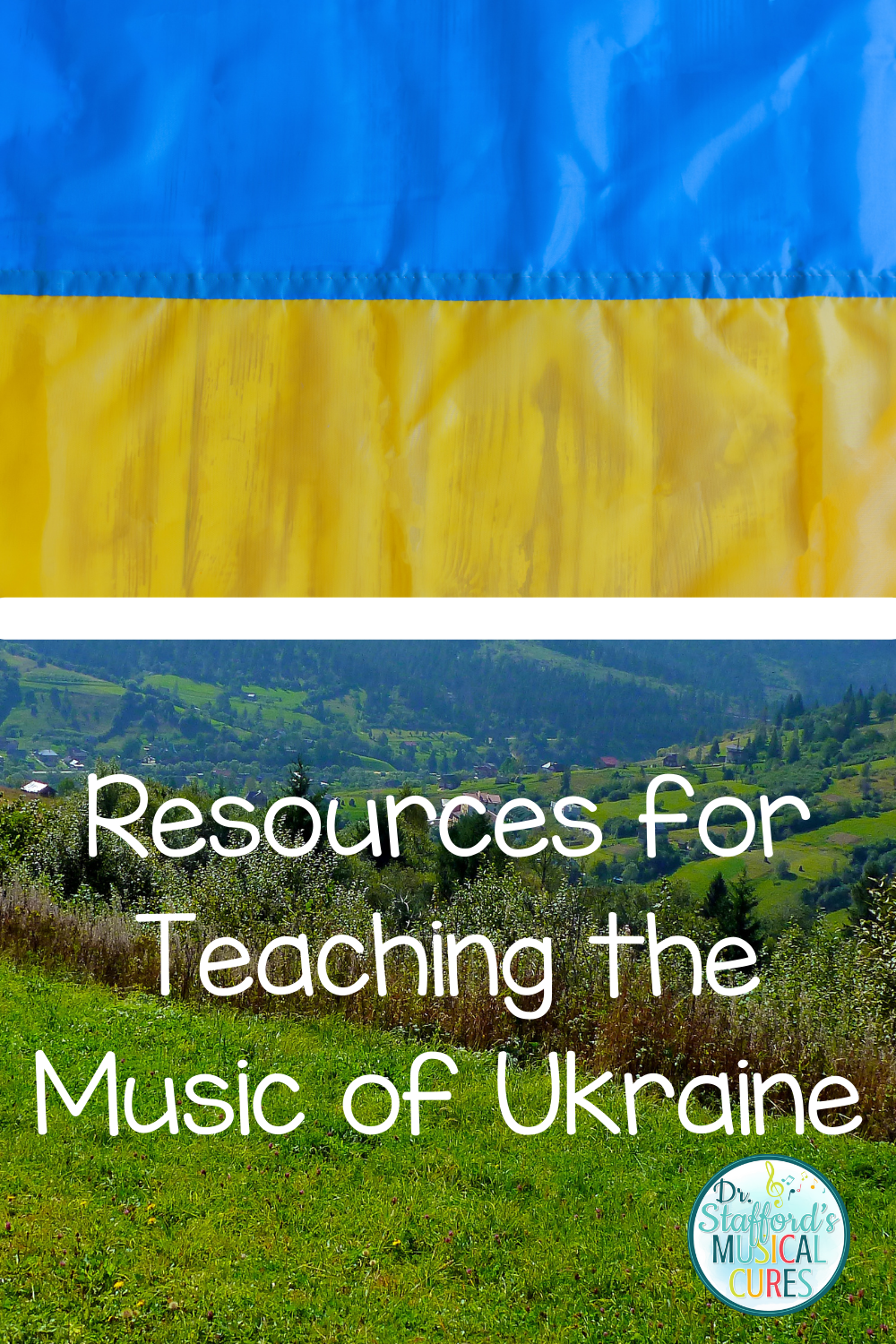 This is a short blog entry, but it’s something that’s been on my mind for several days.

Like most everyone else, I have been saddened and horrified at what took place in Ukraine in March. It reminded me, once again, how we are all one world and in situations together more than we realize. Many of our students definitely do not understand this. It is up to us to understand.

For one, chances are good you have students who are of Ukrainian descent. If you choose to do a short unit on Ukraine, it is important to have resources that provide music as authentically as possible. Ukraine, like other Eastern European countries, has beautiful folk music that goes back generations. Music is a means to hold them together, even in difficult times. Never was this as apparent to me as when I saw a little girl on a news clip, a little girl hiding in one of the many refugee shelters such as subway stations. She was quietly singing to her doll. I couldn’t understand the words, of course, but in her singing, there was hope and a sign that she is still a little girl. What a testimony to the way music soothes us!

Most of us are familiar with The Great Gate of Kiev, part of Pictures at an Exhibition by Modest Mussorgsky, a Russian composer from the Romantic era. The movement is also known as “The Bogatyr Gates (in the Capital in Kiev)”. The gate exists and was built to protect the cathedral of St. Sophia. Kiev (also known as “Kyiv”) was part of the Lithuanian Duchy, then the Commonwealth of Poland-Lithuania, and then part of the Russian Empire, where it was known as “Kiev”. When Ukraine gained independence, the city was called “Kyiv” (one syllable with a long “e” sound) and the gate was restored.

So, why are there two different spellings and pronunciations of the city?

More information on the gate and city:

Ukrainian folk music can be divided into two categories: ritual and non-ritual (Smithsonian Folkways). Children in Ukraine start becoming involved in national art from a very young age.  The strength and popularity of Ukrainian folk music stem from its focus on the history of Ukraine, society, and the people themselves. Ritual songs can include incantations for healing, laments (dirges), ritual songs of the folk calendar (songs of the winter cycle and spring cycle), wedding songs, and work songs. The songs are heterophonic, or the same melody is divided among parts.

The Ukrainian People Website has an extensive description of the history and variety of folk instruments common in the country: folk fiddles, lyres, pipes, drums, accordions, and an instrument similar to the hammered dulcimer. Traditionally, instrumental music was used for dancing, for traditional signals, and for funerals.

A treatise by Rev. Humphrey Kowalski is research that focuses on the topic of folk songs, with a focus on historical/political songs and various eras.

The best way to learn about the music of a culture is to listen to musicians of that culture. The following links lead to recordings of Ukrainian musicians:

Also, the Ukrainian national anthem is available in various arrangements from online sheet music sites. I even found an arrangement for flute trio. If you choose to do an arrangement for recorder or other pitched instruments for elementary, you might want to consider transposing or simplifying. Many of the copies I found were in key signatures of at least 3 sharps or flats.

As I did the research for this blog, I honestly had no idea of the extension and variety of Ukrainian instrumentation and folk songs and their usages. There is beauty in a country or culture having their own folk traditions, something they can share, something that unites them. Kodaly was correct in his focus on children learning the music of their own cultures as the foundation for learning other music. He considered it an emotional, intellectual, and personality necessity. (Trinka).

A little Ukrainian girl, waiting in a shelter to leave for safety, understood this need probably more than many adults from other cultures do.

As I mentioned, the best way to learn the music of a different culture is to learn from those of that culture. If you are Ukrainian or of Ukrainian descent and know other aspects of the music of Ukraine, please send me an email, especially if there are corrections that need to be made. It will be greatly appreciated, and corrections will be made so this blog can represent the topic as accurately as possible.